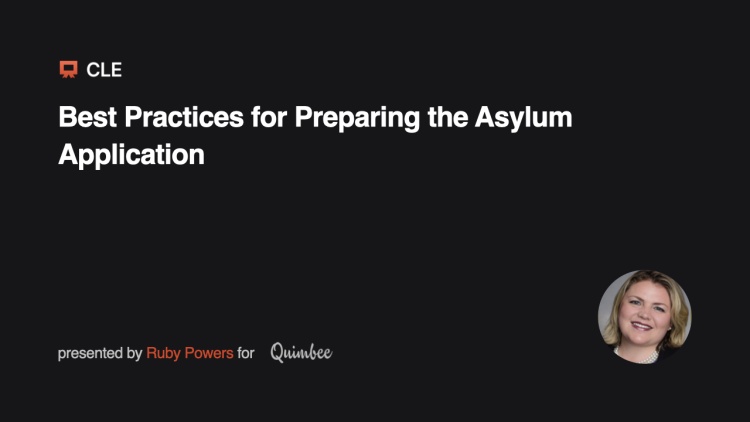 In this beginning to intermediate course, learn from an expert with more than 14 years of asylum experience on the best practices and tips on how to prepare the asylum application and additional supplemental materials to put your client’s best case forward. Whether it's your first time, or you have experience, compare notes and learn suggestions from a diversified successful asylum practice by immigration attorney Ruby L. Powers. Learn asylum office specific advice on preferences for filing deadlines and specific details of various asylum offices. In addition to the application and supplemental materials, learn how to prepare your client for the best asylum interview or immigration court hearing experience. This course will cover the three sections of the affirmative asylum interview and best practices to prepare your client for a smooth experience in an already stressful process. Assimilate the best practices on how to prepare your client for the immigration court hearing and being cross examined by the trial attorney and the immigration judge. Study how to formulate and anticipate questions so your client will be prepared for the interview or hearing.

Become a member and get unlimited access to our massive library of law school study materials, including 957 video lessons and 6,900+ practice questions in 1L, 2L, & 3L subjects, as well as 28,500+ case briefs keyed to 983 law school casebooks.