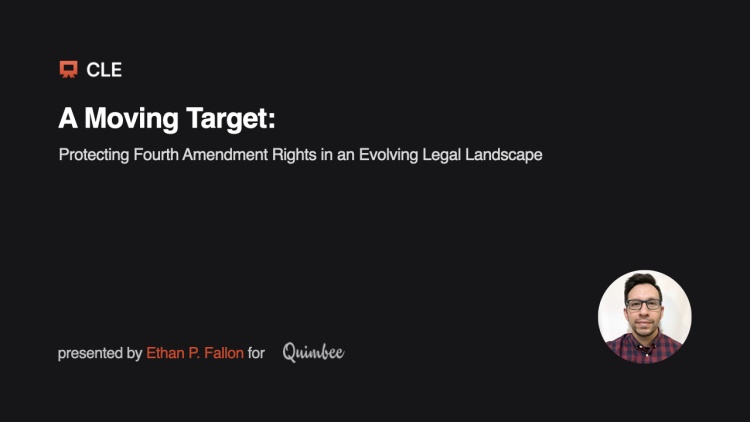 The Fourth Amendment’s vague directive, which prohibits the government from conducting unreasonable searches and seizures, has been subject to perpetual (re)interpretation since the Founding Era. This is in part, by design. The amendment’s key terms are undefined, and thus their meanings have remained unfixed. Adding to the morass is assessing how courts should best enforce Fourth Amendment safeguards in this constantly evolving legal landscape. In this course, we will analyze how the U.S. Supreme Court (and other courts) has applied Fourth Amendment protections in resolving novel legal questions. We will also explore unresolved legal issues that courts are facing or will likely face soon. Participants in this course will gain an understanding of how Fourth Amendment law has recently changed and how the amendment’s protections might apply to individuals today.

Hello, and welcome to this presentation on protecting Fourth Amendment rights in an involving legal landscape. My name is Ethan Fallon and I specialize in appellate litigation as an Assistant Attorney General in the office of the Solicitor General for the District of Columbia. Our office handles litigation for the district in the appellate courts, including the D.C. Court of Appeals, the U.S. Court of Appeals for the D.C. Circuit and the U.S. Supreme Court. Prior to this role, I served a special counsel to the Senate Judiciary Committee, where I assisted on the confirmation proceedings of U.S. Supreme Court and other federal court nominees. I was also a member of a law firm Supreme Court and appellate practice group, where I handled matters in various federal and state appellate courts, including successfully seeking cert before the us Supreme Court in a Fourth Amendment case heard in the October, 2020 term. Lastly, I also serve as an adjunct professor at the University of Virginia School of Law, where I teach a course on American Constitutional law. So today we'll gain an understanding of how Fourth Amendment law has developed, as both doctrinal matter and the practical consequences of those legal developments. The Fourth Amendment's vague directive, which prohibits the government from conducting unreasonable searches and seizures, has been subject to perpetual reinterpretation since the founding era. This is in part by design. The amendment's key terms are undefined and thus their meanings have remained unfixed. Adding to the morass is assessing how courts should best enforce Fourth Amendment safeguards in this constantly evolving legal landscape. In this course, we'll have five main objectives. First, to better understand the Fourth Amendment's Constitutional framework. Second, to review historical legal developments interpreting the amendment's key terms. Third, to analyze recent Supreme Court precedent applying Fourth Amendment protections. Fourth, to identify unresolved legal issues that courts are grappling with or will likely confront soon. And finally, to gain a practical understanding of how an individuals Fourth Amendment rights might be enforced today. Let's begin by discussing the Fourth Amendment's Constitutional framework, which is just 54 words. It states the right of the people to be secure in their persons, houses, papers, and effects against unreasonable searches and seizures shall not be violated and no warrants shall issue, but upon probable cause supported by oath or affirmation, and particularly describing the place to be searched and the persons or things to be seized. And that's it. Those 54 words have been subject to interpretation and reinterpretation by the courts, scholars and everyday individuals. But before we get into the legal interpretations of the Fourth Amendment, let's discuss the plain meaning of the words it uses and let's focus on the search and seizure clause, which is the antecedent question to whether a warrant is required in a given situation. How does one define a seizure, for example? Does it mean grabbing someone, holding onto someone? What about preventing someone's movement or does it mean a combination of all three? And how does one define a search? Does that mean physically moving someone's personal papers and effects, or is it a search only if those things are studied carefully? What about searching a computer or a cell phone or some other digital device? And does it matter that type of search conducted? Is there a distinction between a cursory review of something versus an in depth dig? And what about the word unreasonable? Miriam Webster defines unreasonable as exceeding the bounds of reason or moderation, which is about as vague as the word itself. So who gets to decide what is considered an unreasonable search or seizure? Is it just the courts? Even so, what methodology do courts apply in making this determination? Moreover, can what is considered reasonable and unreasonable change over time, particularly in new context? For example, the digital age has provided new ways for individuals to store and utilize personal information that didn't exist in the past. Does that make a difference on defining any of these terms? Ultimately, as you can see, defining these terms independently can be quite tricky and even more so when applying them to circumstances governed by the Fourth Amendment, which brings up a key point in our discussion. Here, we're discussing what constitutes a Constitutional search and seizure for purposes of the Fourth Amendment versus searches and seizures that don't fall under the amendment's ambient, which is an important distinction to make. For example, an individual who freely publishes personal information on say Twitter, or in another public setting, might not be protected under the Fourth Amendment if a government agent searches such publicly available information. Another key issue to point out in the text of the Fourth Amendment is what's missing from it. If we look back to those 54 words, there exist no enforcement mechanism or other ways in which the Fourth Amendment's protections can be safeguarded. We'll discuss this in more detail later, but from a textual standpoint, it is quite interesting to observe that the founders didn't explicitly incorporate means in which citizens can enforce the freedom the Fourth Amendment provides. Today, those freedoms are protected or enforced in different ways, in both the civil and criminal contexts. But when we think about enforcement mechanisms, let's remember to separate substantive Fourth Amendment law with the application of Fourth Amendment protections as substantive Fourth Amendment law changes, how we view what the amendment protects. So does how those rights are enforced as a Constitutional matter and in conjunction with other statutory rights that aim to enforce those fundamental protections.